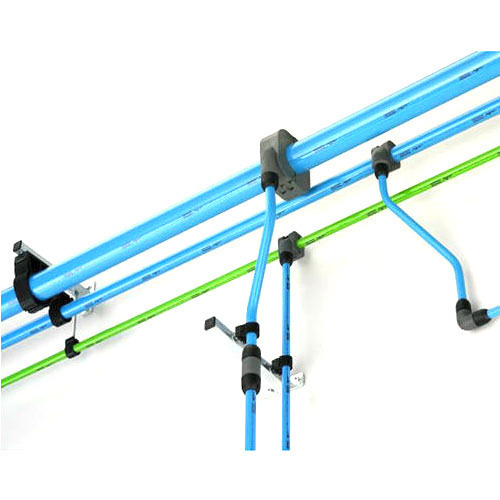 Condensation control must be considered when installing a compressed air piping system. Drip legs should be installed at all low points in the system. A drip leg is an extension of pipe below the airline, which is used to collect condensate in the pipe. At the end of the drip leg a drain trap should be installed. Preferably an automatic drain should be used (see drain valves section of this catalogue for a complete description of the type of drain valves available).

To eliminate oil, condensate, or cooling water (if the water-cooled after cooler leaks), a low point drain should be installed in the discharge pipe before the after cooler. Be sure to connect the after cooler outlet to the separator inlet when connecting the after cooler and the moisture separator together. If they are not connected properly, it will result in either poor aftercooling or poor separation.

The main header pipe in the system should be sloped downward in the direction of the compressed air flow. A general rule of thumb is 1” per 10 feet of pipe. The reason for the slope is to direct the condensation to a low point in the compressed air piping system where it can be collected and removed.

Make sure that the piping following the after cooler slopes downward into the bottom connection of the air receiver. This helps with the condensate drainage, as well as if the water-cooled after cooler develops a water leak internally, it would drain toward the receiver and not the compressor.

Pressure drop in a compressed air system is a critical factor. Pressure drop is caused by friction of the compressed air flowing against the inside of the pipe and through valves, tees, elbows and other components that make up a complete compressed air piping system. Pressure drop can be affected by pipe size, type of pipes used, the number and type of valves, couplings, and bends in the system. Each header or main should be furnished with outlets as close as possible to the point of application. This avoids significant pressure drops through the hose and allows shorter hose lengths to be used. To avoid carryover of condensed moisture to tools, outlets should be taken from the top of the pipeline. Larger pipe sizes, shorter pipe and hose lengths, smooth wall pipe, long radius swept tees, and long radius elbows all help reduce pressure drop within a compressed air piping system.

The layout of the system can also affect the compressed air system. A very efficient compressed air piping system design is a loop design. The loop design allows airflow in two directions to a point of use. This can cut the overall pipe length to a point in half, and that reduces pressure drop. It also means that a large volume user of compressed air in a system may not starve users downstream since they can draw air from another direction. In many cases a balance line is also recommended which provides another source of air.

Reducing the velocity of the airflow through the compressed air piping system is another benefit of the loop design. In cases where there is a large volume user, an auxiliary receiver can be installed. This reduces the velocity, which reduces the friction against the pipe walls and reduces pressure drop. Receivers should be positioned close to the far ends or at points of infrequent heavy use of long distribution lines. Many peak demands for air are short-lived, and storage capacity near these points helps avoid excessive pressure drop and may allow a smaller compressor to be used.